How to increase barley tiller numbers

The number of tillers, leaves and shoots determines the size of the canopy and the final ear density at harvest.

This ear density will be dependent on the total number of shoots produced and how many of these are fertile and survive. Whilst all nutrients are essential for growth and development, the most important macro nutrients for early shoot, leaf growth, and shoot survival are nitrogen, phosphate, and sulphur. Of the micronutrients, manganese and zinc are the most important for increasing leaf and shoot numbers.

Achieving the correct shoot population is very important in barley as it has a fixed number of possible grains per ear/spike compared to wheat that has a greater capacity to compensate with the number of grains / spikelet ranging from 2-5. It should also be noted that in barley the yield of the first and second tillers are very similar so where populations are low some yield recovery can be managed by encouraging more tillers. This is different compared to wheat and rye.

Two-rowed barley varieties have lower ear weights; consequently a higher ear density than in six row types is necessary to reach the same yield. Higher seeding rates and productive tillering promoted by nitrogen fertilizer use are necessary with two-rowed types (e.g. 700 - 800 ears/m2 as compared to 550 - 600 ears/m2 on fertile soils with ample water supply). With multiple-row types the target should be about three ears per plant, and with spring-sown two-row types two ears per plant. Because of the importance of minimising floret reduction and grain formation in two-row types, an adequate nutrient supply must be ensured during shooting and after flowering.

Nitrogen has the greatest influence on leaf and shoot numbers

Nitrogen is the single most important nutrient for achieving high yields. Typically 4% of the plant material (biomass) is nitrogen with adequate supplies giving bigger and more leaves which leads to more potential shoots. 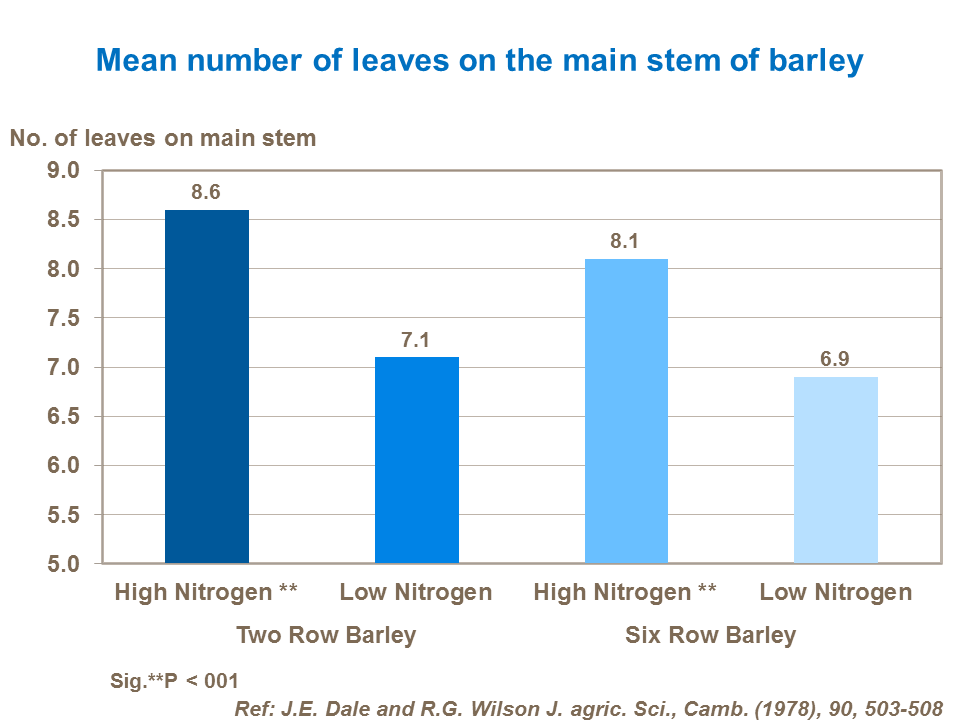 Adequate supplies of nitrogen during development will produce more leaves on the mainstem of barley. 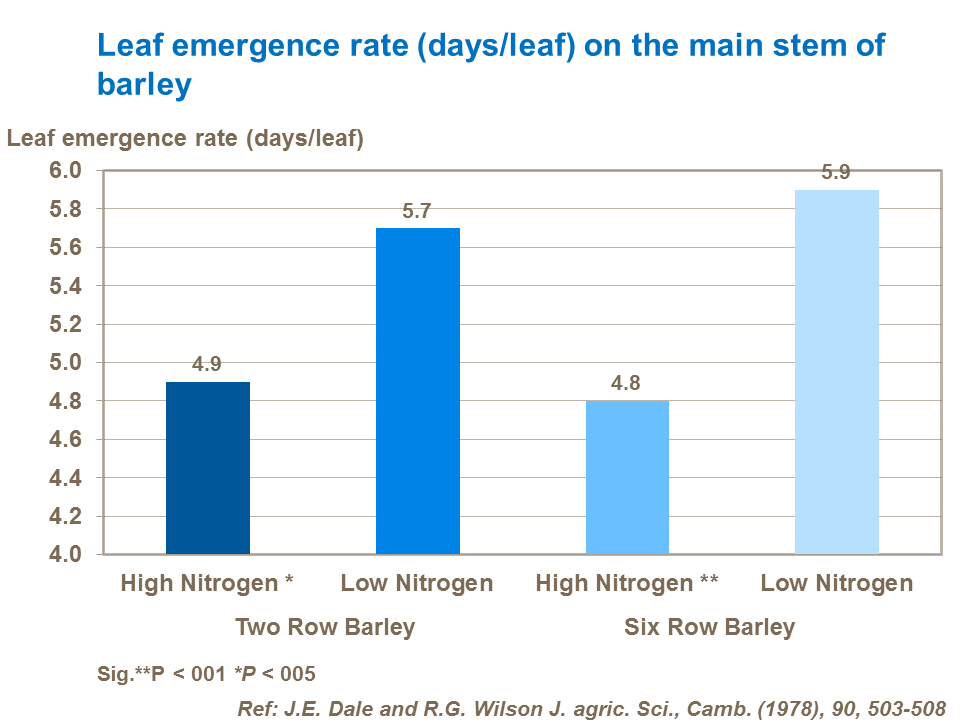 Each leaf develops faster and nitrogen deficiency will reduce the rate of primordia initiation, which reduces the final number of potential spikelets (grain sites). 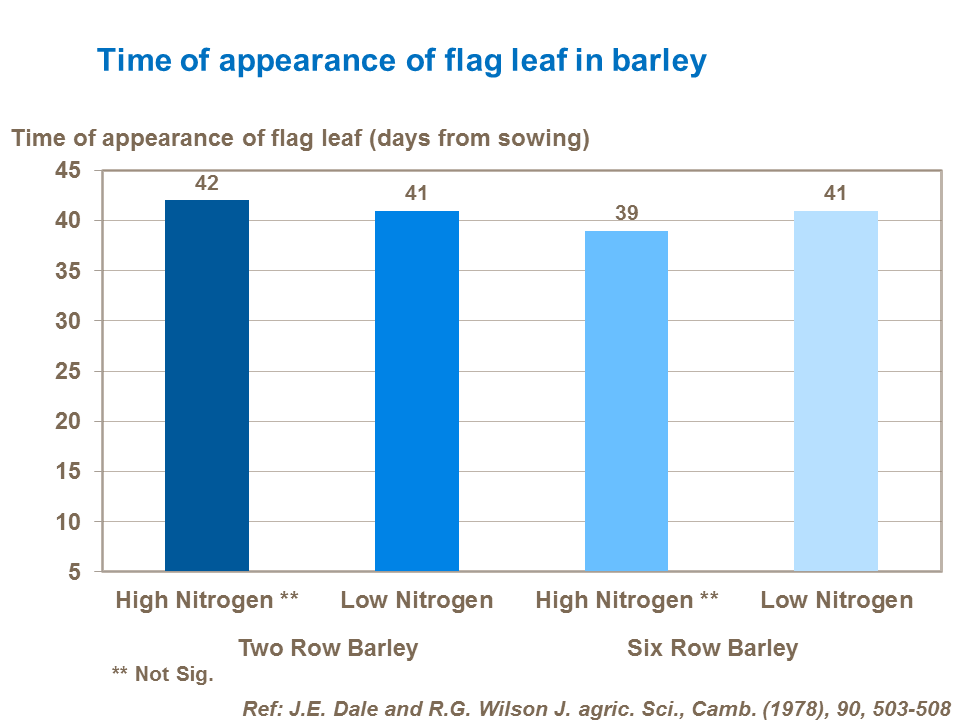 It is also important to note that using the right rates of nitrogen for canopy development will not affect the physiological development. This development time is often characterised by the appearance of the flag leaf.

The survival of the shoots / tillers that are produced can be influenced by interactions between nitrogen application rates and timing. Where shoot numbers are below the optimum, the applications of higher nitrogen rates early in the season (Zadoks 25 – 30) will increase shoots and thereby final ear numbers. This crop manipulation should not be used where plant populations are on target, as it can lead to excessive leaf and shoot growth and lodging. Lower application rates early should be used where shoot numbers are on target.

Where spring barley is being grown, the time for leaf and total shoot production is very limited so early supplies and high rates of nitrogen are critical for achieving the required early growth rate and shoot numbers.

There is also a good correlation between the amount of shoots produced and the size of the root mass. Generally a high shoot number gives a large root mass which gives the plant improved nutrient uptake and more resilience against drought.

Early leaf and shoot development that affects final plant numbers can also be dramatically affected by micronutrient deficiencies. Manganese and zinc are two important micronutrients that will affect the developing components of yield, such as increasing the ear number and grain size, resulting in increased final harvested yield. 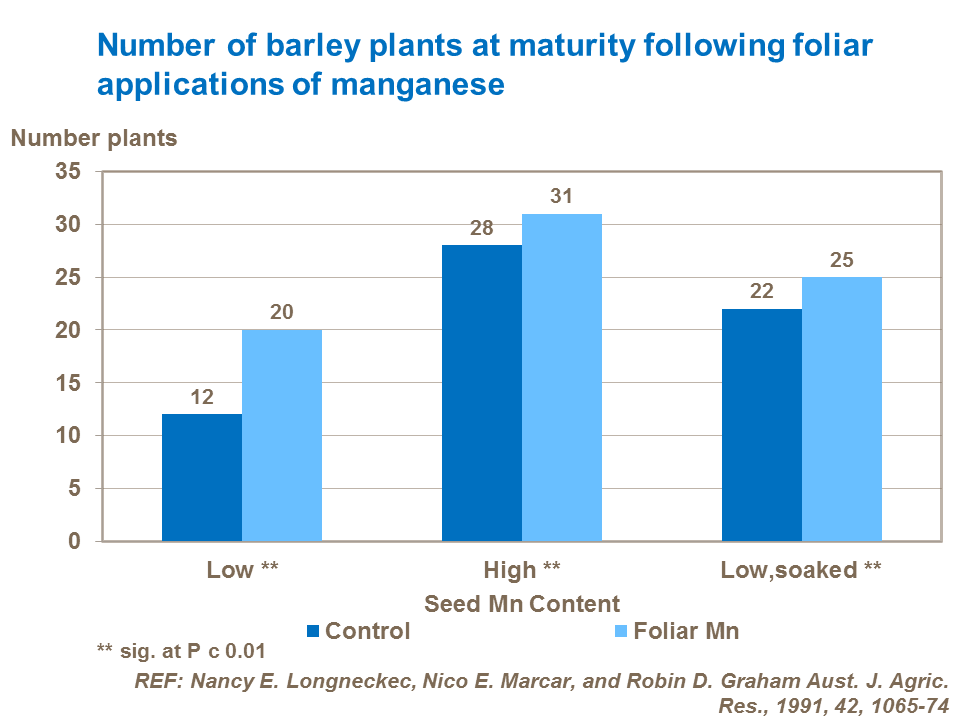 The number of shoots that develop will be affected by the following:

In general as the number of seeds is reduced, and the earlier the drilling, the more each individual plant will tiller, with the final shoot number being dependent on the number of tillers that survive through to producing ears.

The tiller number and survival can be influenced by: