Fertilizer needs are less during the immature phase, normally the first two years. Indeed at this stage, it is important not to over-use nitrogen as shoot growth can get out of balance with root growth.

Nutrient application rates are at their highest during peak berry productivity – normally year three onwards. At this stage, offtake in the harvested berry is greatest. With many crops being cultivated on sloping land and subject to high rainfall, surface run off and nutrient loss can be a major problem.

Mulching – returning the pulp and any pruning – helps recycle nutrients, but optimal rates of fertilizer are still needed to reach tree’s demand. Common practice is to use frequent applications of fertilizer – particularly of nitrogen and potassium, throughout the season, to maintain optimum growth.

Nitrogen and potassium are required in similar quantities. Uptake of both is between 150-250kg/ha in mature trees. 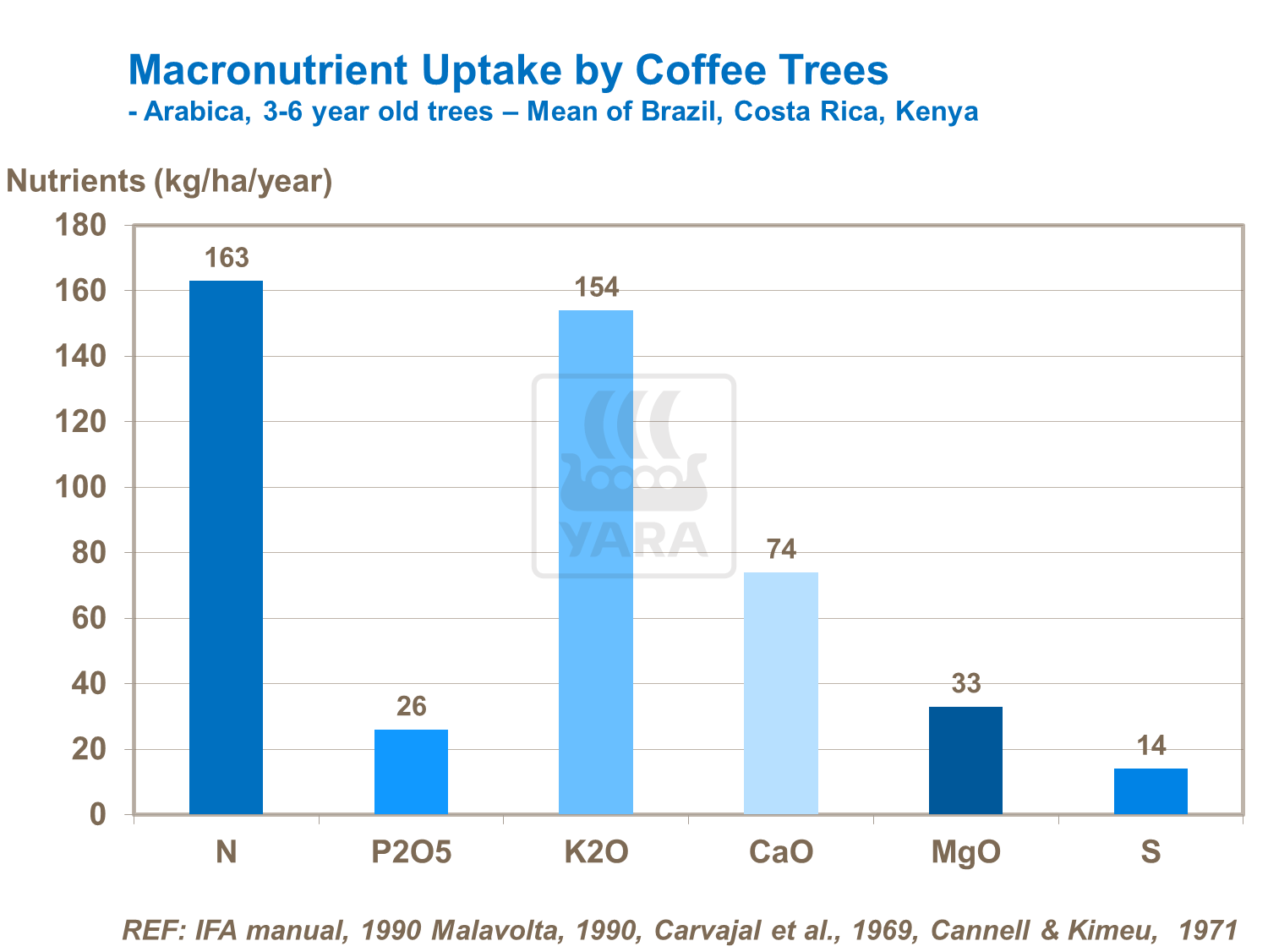 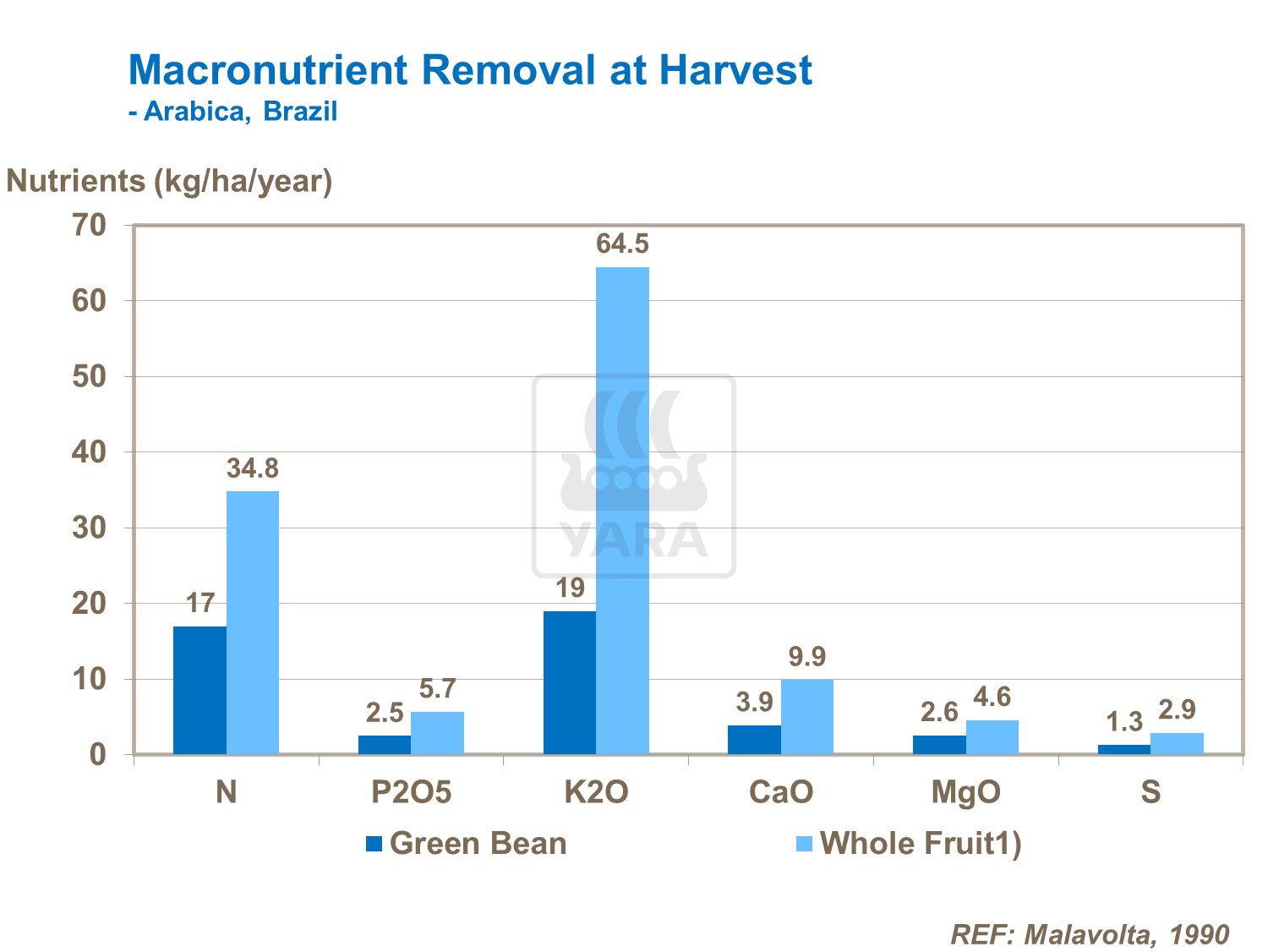 Nitrogen is essential for productive vegetative growth and high yields. Uptake is earlier in the season during new leaf growth and flowering. While N-supplies should be maintained throughout the season, too much N at later stages of growth can reduce bean size.

Potassium use peaks later than that for nitrogen. K is particularly important during berry growth. Much of the K-offtake at harvest – over 50kg/ha - is in the pulp. In practice, fertilizer programs in intensive, high rainfall, coffee producing areas apply 250-450kg/ha of nitrogen and potassium per annum. Lower rates may be used if the soil potassium levels are high, or the coffee leaves are high in nitrogen. Care has to be taken to balance potassium use alongside calcium and magnesium, as over-supply of one will restrict uptake of the others. 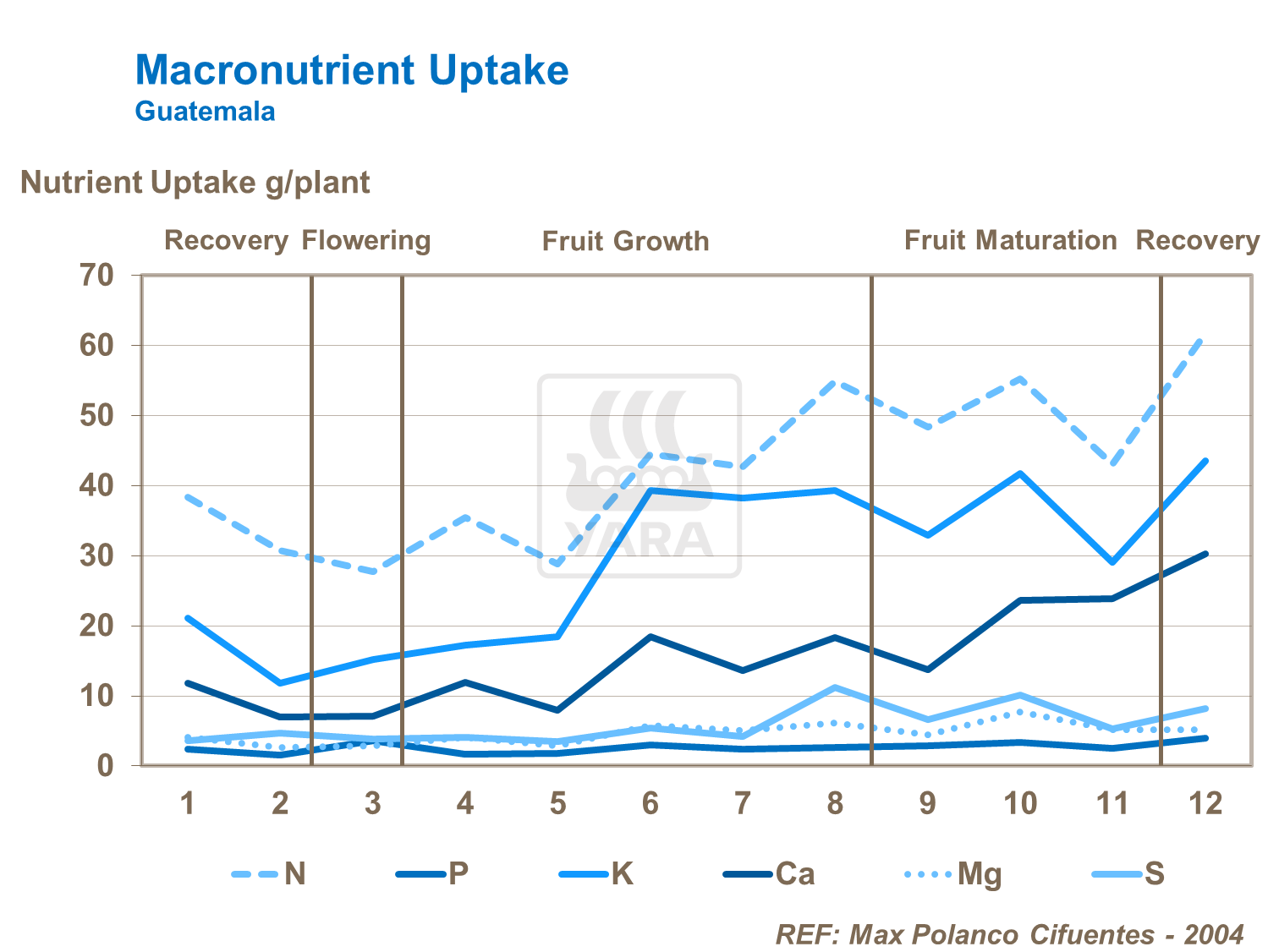 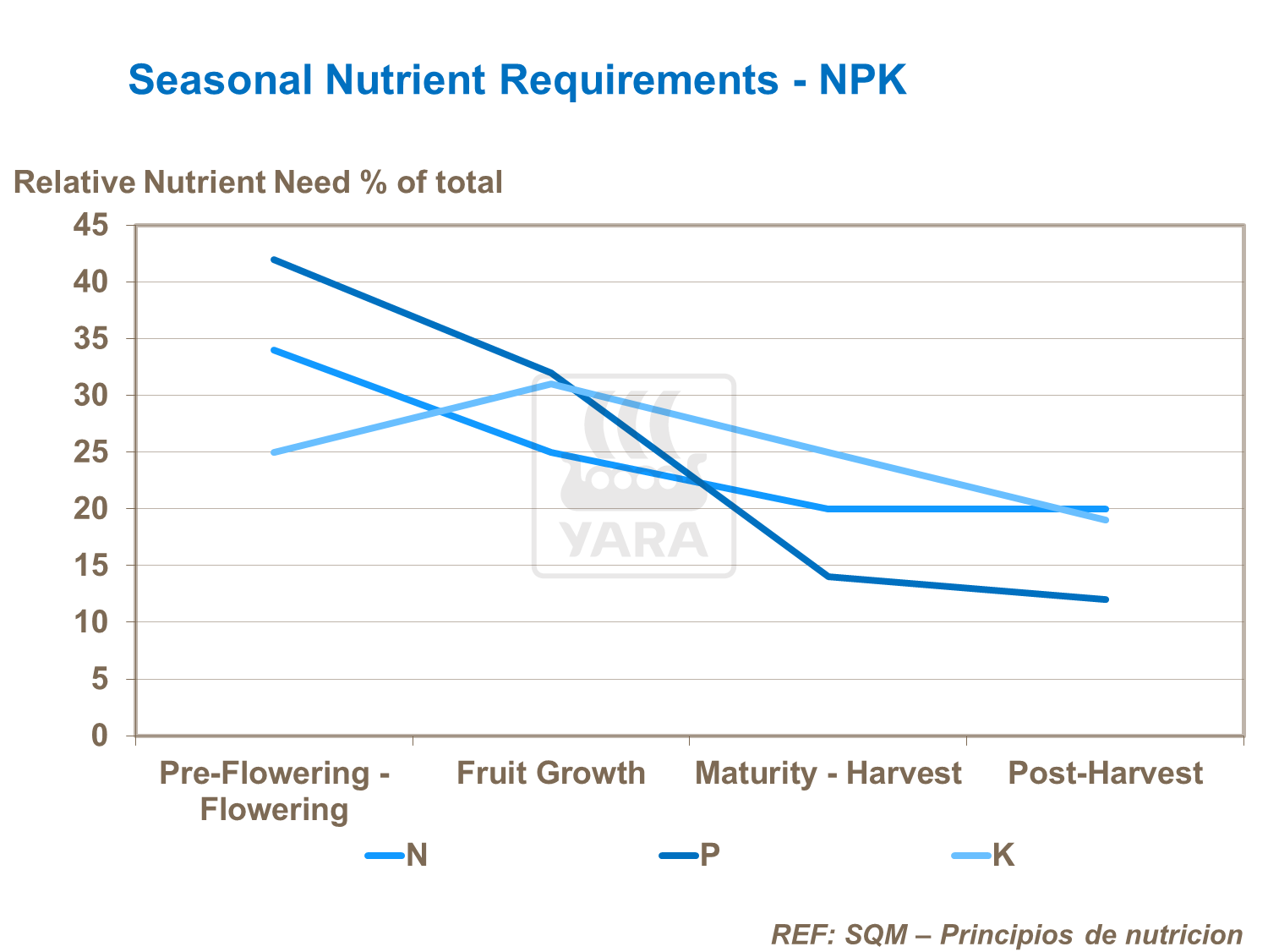 Phosphorus is required in much smaller quantities with just 25kg/ha P2O5 required to support annual growth. Phosphorus is particularly important in nurseries and during the tree establishment phase as well as prior to flowering to boost root growth.

Fertilizer use – including foliar applications – is important where there is tie-up of phosphorus due to soil fixation. In these situations, up to 100kg/ha of phosphorus can be applied per annum. Calcium is the third most important nutrient in terms of total requirement. Between 75-100kg/ha is required for productive tree growth and quality berry production.

Uptake of Ca continues right through maturity and into berry fill. Magnesium and sulfur are required in lower quantities compared to calcium with total uptakes of 30-60kg/ha and 14- 20kg/ha respectively. Main uptake of both magnesium and sulfur is during maturation.

While much lower concentrations of micronutrients are needed to satisfy good growth, iron, manganese, zinc, copper and boron are key elements. 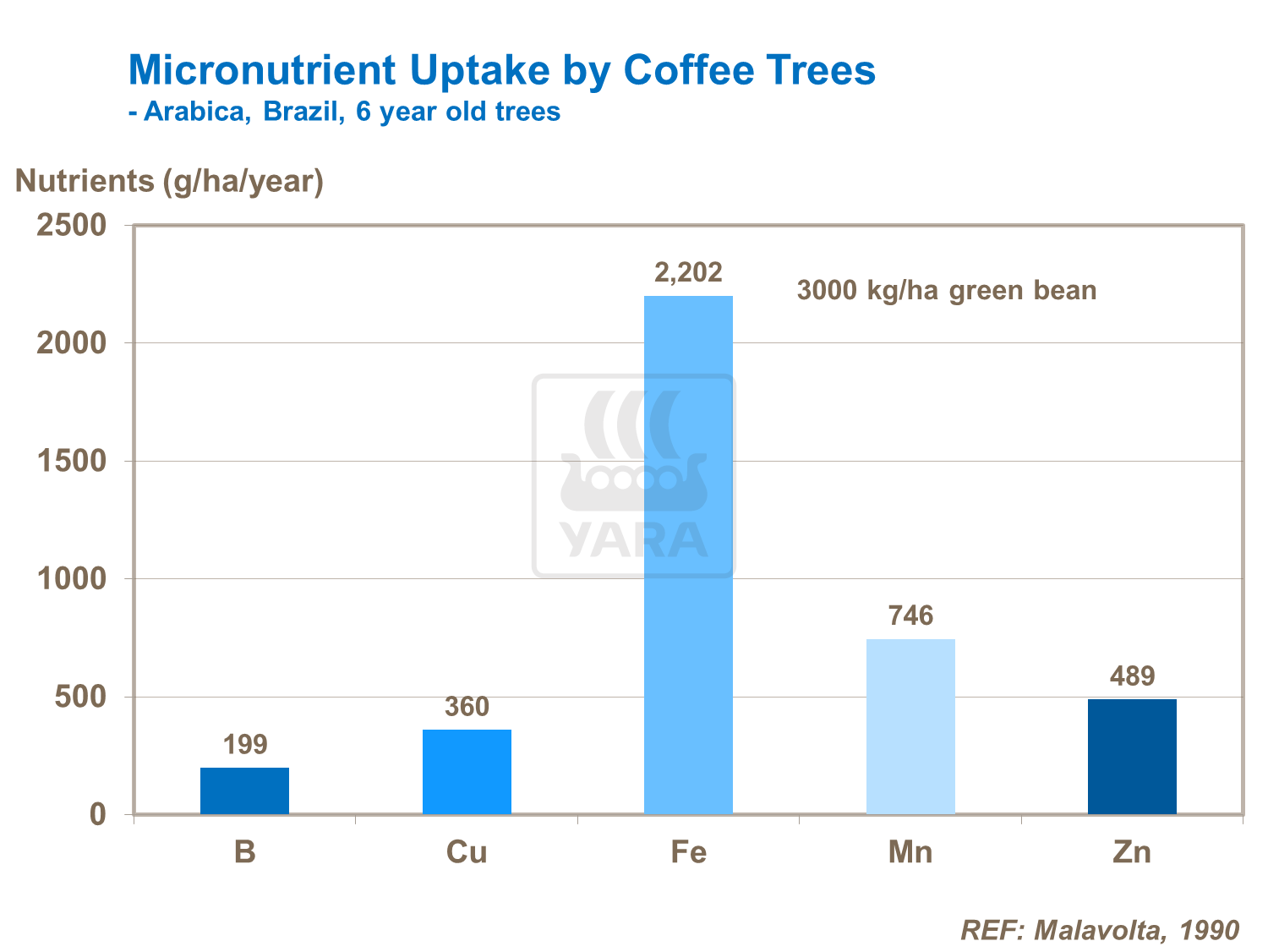 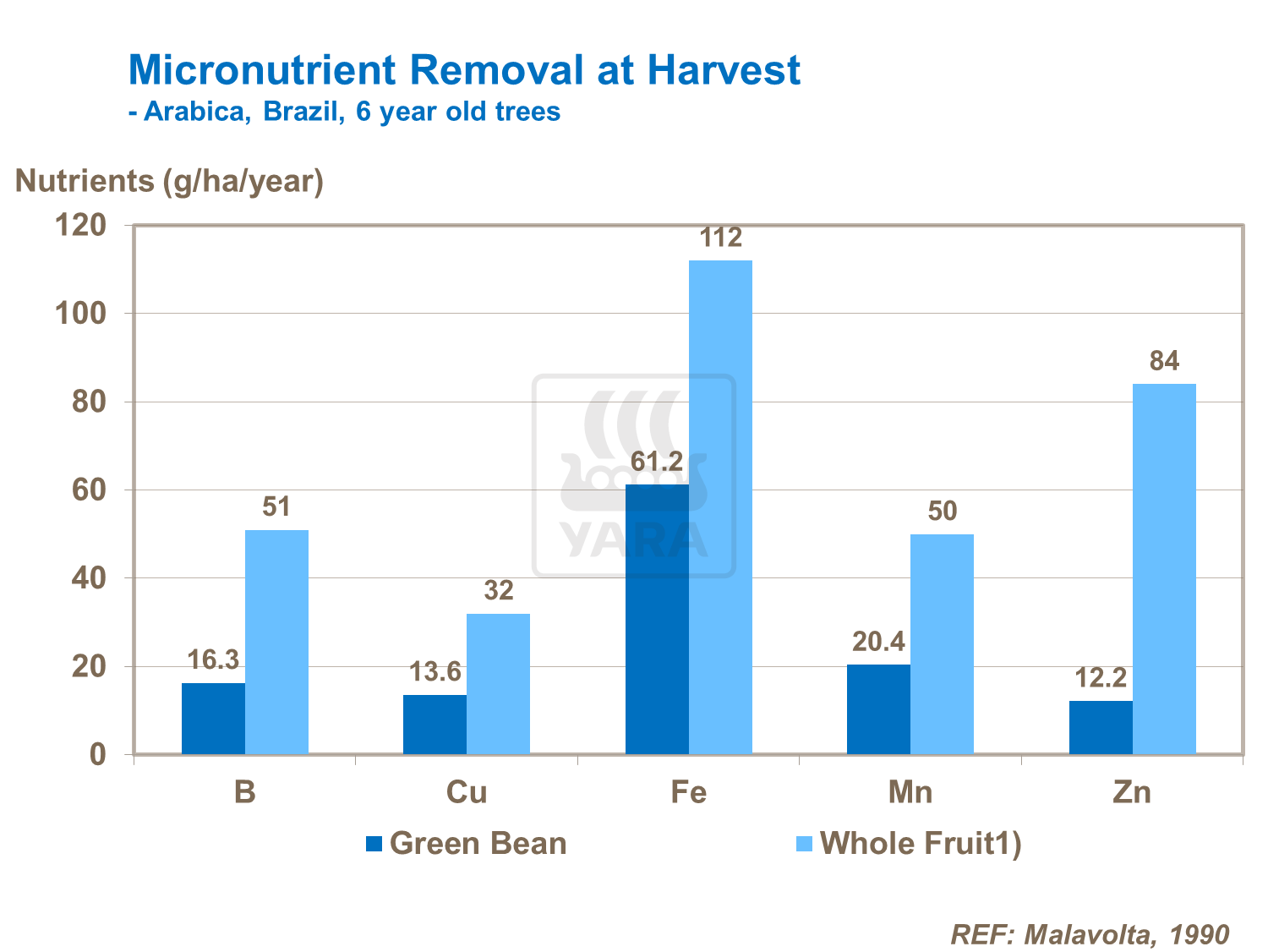 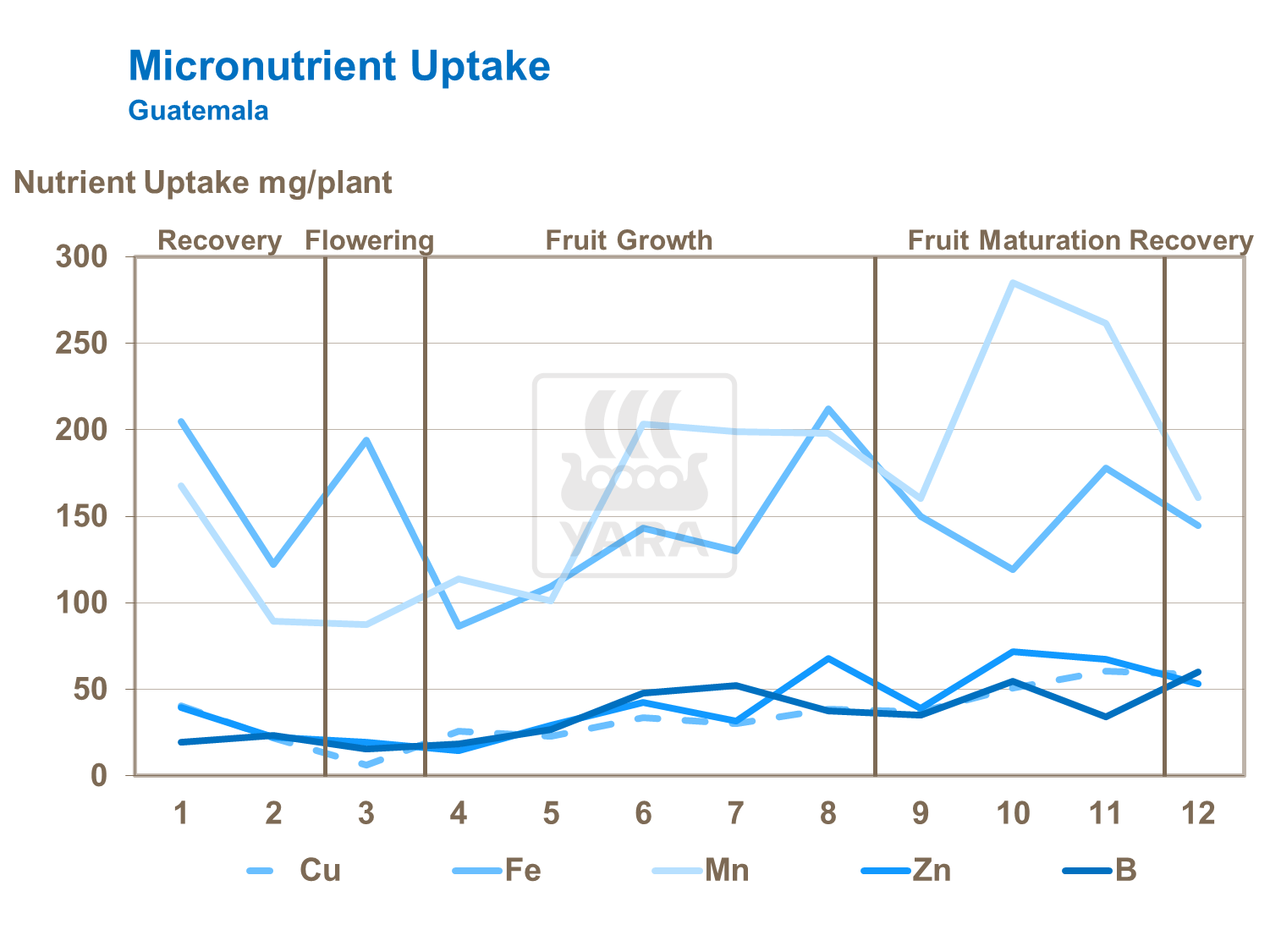 Iron is needed in largest quantities (2000g/ha/year) and, alongside manganese, is important for growth.

Boron and zinc – while needed in lower quantities of 200-500g/ha/year – have a role to play in improving crop quality and an adequate supply is critical during flowering and fruit set. Actual rates of application will vary according to soil type. Upto 3kg/ha/yr of B and 6kg/ha/yr of Zn maybe required.

Micronutrient offtake in the berry is relatively low at between 30-110g/ha, but this needs replacing and will rise considerably when cuttings are removed from the field.

Proportionally, more iron is found in the seed than the pulp and hence, even where the pulp is returned to the plantation as a mulch, relatively large amounts of iron are still needed for optimum growth. Uptake of micronutrients is greatest during cherry maturation – particularly manganese.