How to increase maize grain yield

Maize yield is increased by establishing the correct number of plants to create and maintain an efficient green leaf canopy and then maximising the number of grains per cob and the weight of each grain.

This requires a balanced crop nutrition programme including all macro and micronutrients.

A large number of agronomic factors can influence maize yield, many of which are within a farmers control given the climatic and soil conditions. A balanced crop nutrition programme is essential to ensure the crop achieves its potential.

Grain maize yield is influenced by the same nutrients as the forage maize, however the difference in nutrient removal between the two types needs to be considered when planning the nutrient programme of the following crop.

Nitrogen is essential for plant growth being one of the main building blocks of proteins. In grain maize, the highest yields generally come from N-rates of 200-250kg/ha. Rates need to be high enough to maximise plant growth. Lack of nitrogen results in short cobs with a low number of grains. 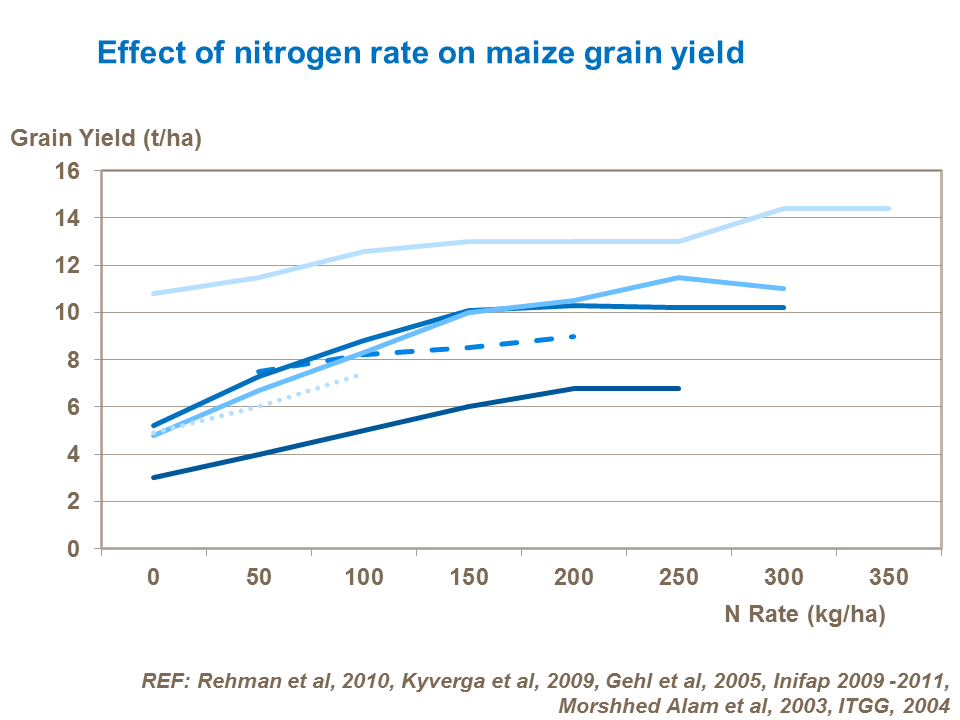 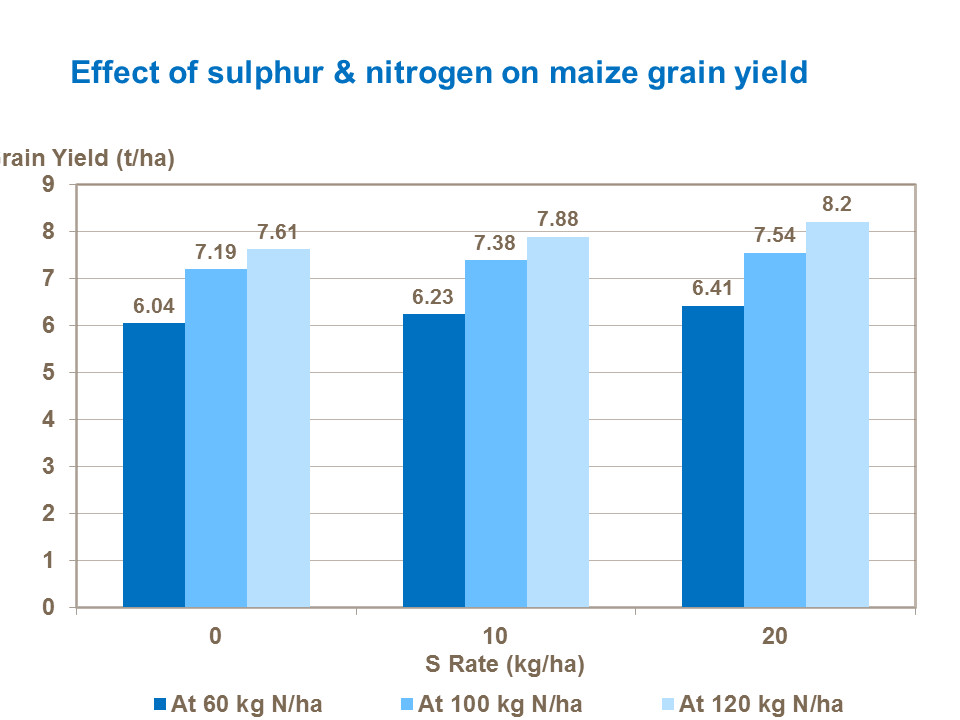 Phosphorus is particularly important for root development and good crop establishment. Crops planted in cold or wet soils  are often slow to establish and phosphorus is often the limiting factor.  Similarly on dry soils where P availability is also limited.

Applications up to 150kg/ha of P>2O5 provide positive yield responses in trials on low P index soils However, even at very high P index soils a starter application of about 20kg P2O5/ha is required to achieve high yields. 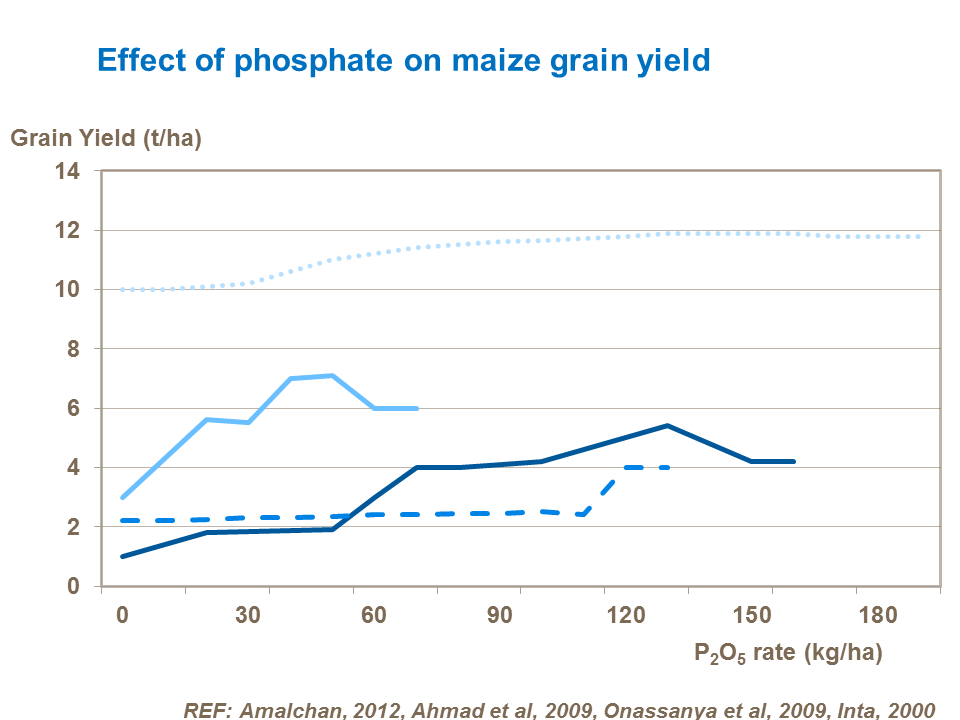 Foliar application of phosphate is the best way to overcome these early deficiencies and will help the crop develop a better root system to support later growth.

Research has shown that phosphate deficient maize plants growing in cold and/or acid soils utilise phosphate applied to the leaf at twice the rate of control plants without any deficiency; much more phosphate was translocated from the leaf, particularly to the roots, which maximises early root development.

Potassium, like nitrogen, also boosts crop development, and large amounts are taken up by the growing plant. Supplies need to be balanced alongside those of nitrogen. Good potassium nutrition can also help minimise the effects of frost damage and reduces lodging. Potassium is most important for stomatal closure and low supplies result in loss of water from the plant. 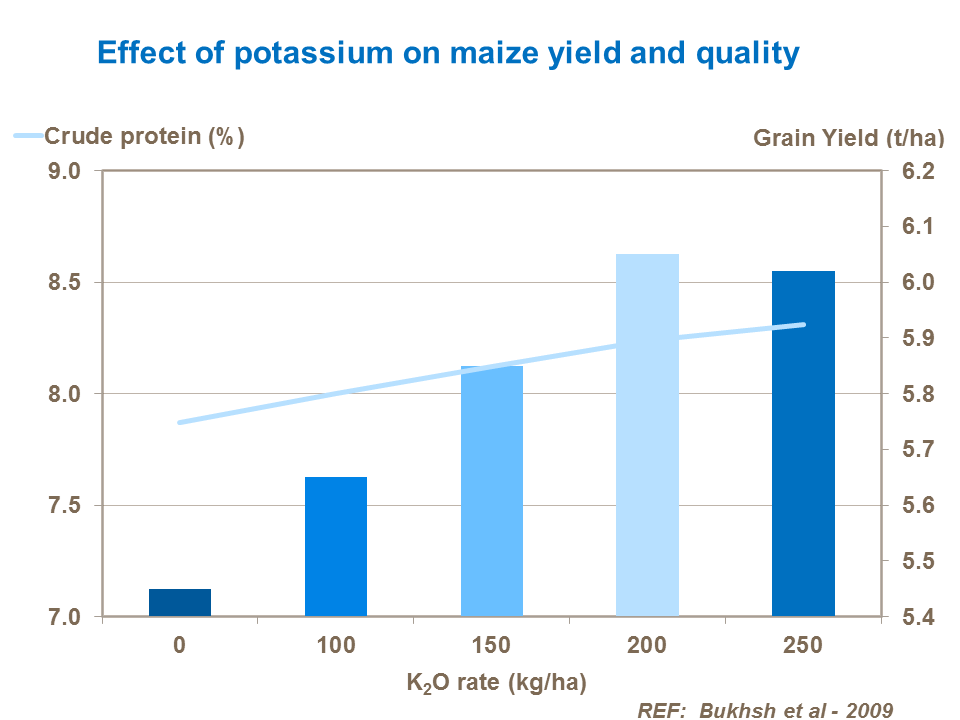 Magnesium has a vital role in photosynthesis

Magnesium is the central component of chlorophyll linked to four nitrogen molecules. The magnesium level is also therefore important in maintaining the green leaf canopy.

As well as the canopy greenness, it is also important to ensure that the structure and architecture is maintained further improving the efficiency of the crop to capture light and convert it to yield. 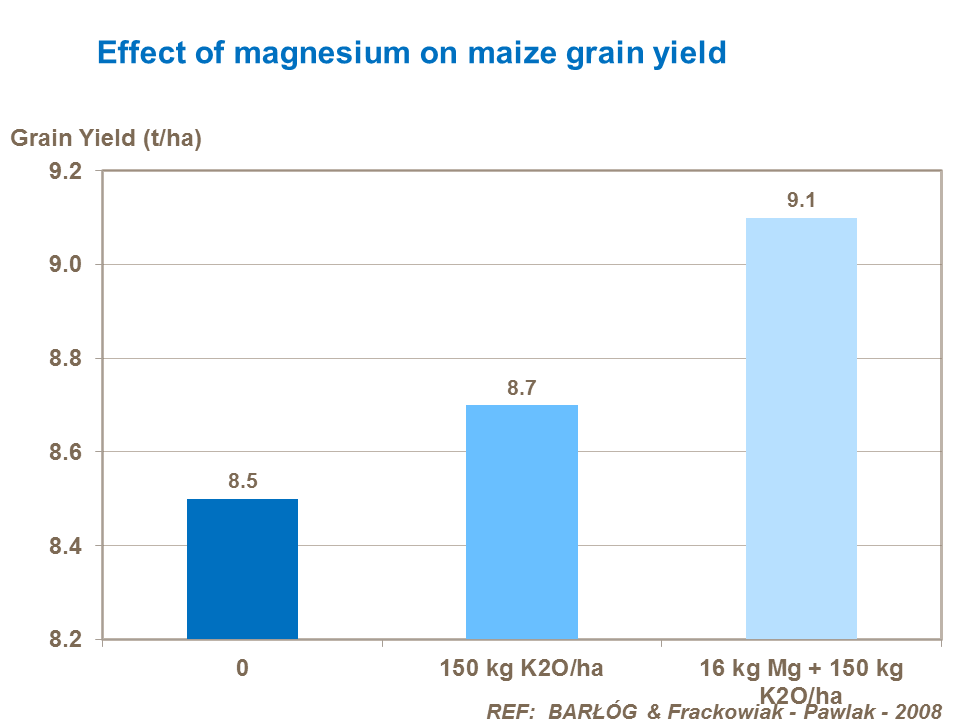 A balanced crop nutrition programme is essential to ensure the crop achieves its potential. All nutrients are necessary and a deficiency of a single micronutrient can restrict growth processes and subsequent yield.

Boron is involved in cell extension, pollen tube growth and hence has a direct effect on grain set. A lack of boron can lead to a restricted grain set, with the cob having many missing kernels and a few large grains. Foliar or soil applied boron during stem elongation (V5 to V7) can contribute to higher maize grain yield. 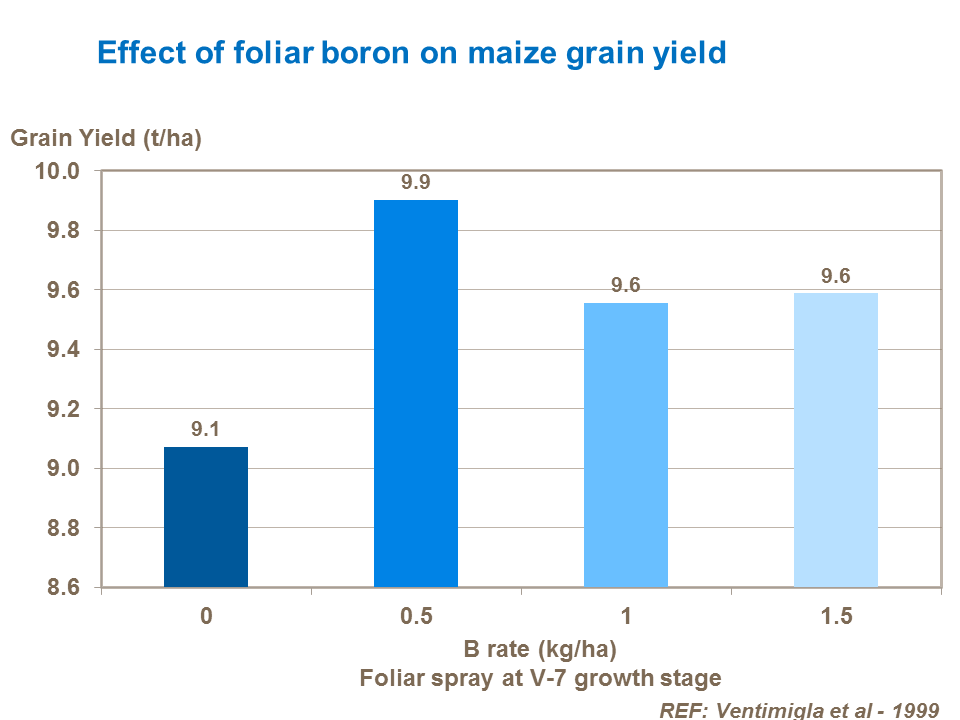 Maize plants are sensitive to copper deficiency and peak demand is during the generative growth stage. Plants require relatively low levels of copper compared to other micronutrients and little is removed in the harvested crop. 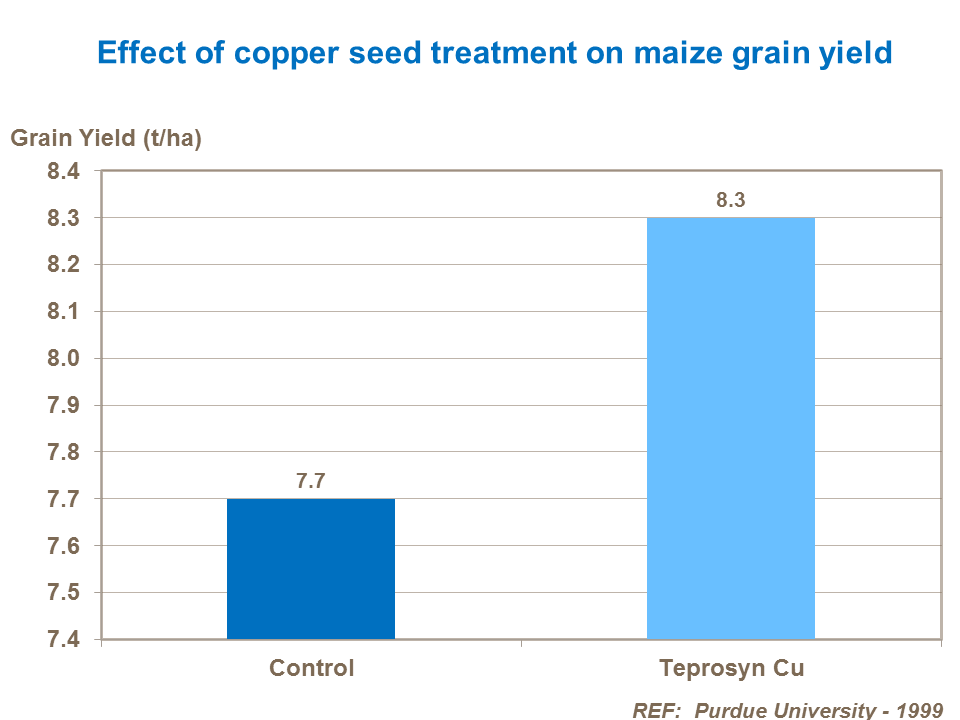 Manganese has a direct effect on plant development and growth. It is involved in chlorophyll production and photosynthesis, and acts as a catalyst in many plant growth processes including the metabolism and synthesis of proteins. Most manganese accumulates in the leaves and stems – more so than any other micronutrient. Uptake is gradual particularly during vegetative growth. Foliar or soil applications can be used to increase grain maize yield. 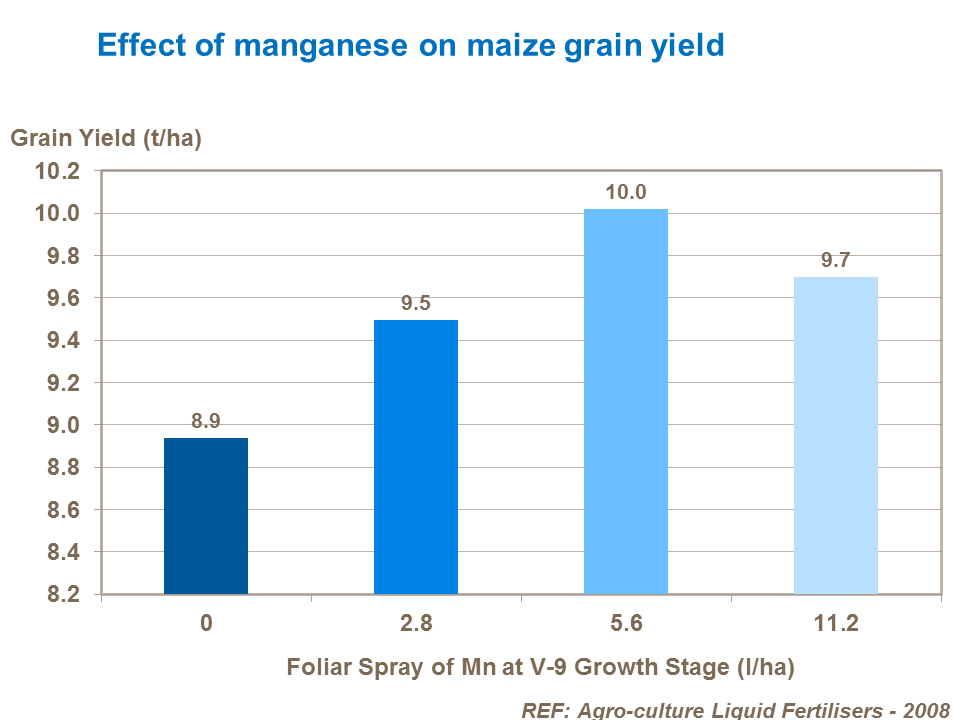 Zinc is important for photosynthetic activity. 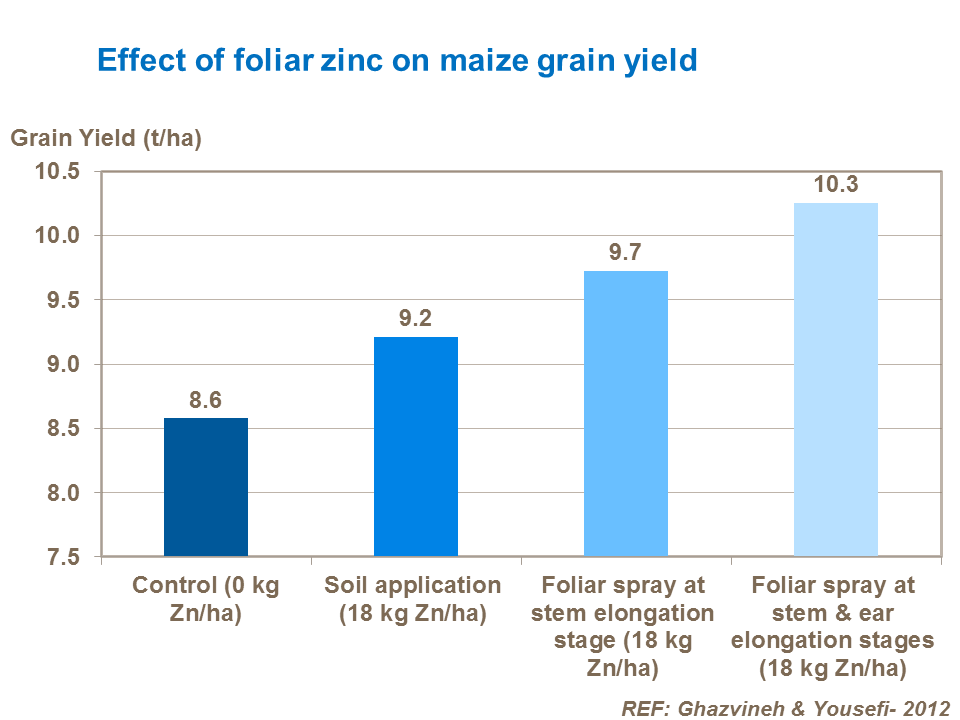 How to increase forage maize yield

Forage maize yield is increased by establishing the correct number of plants to create an efficient green leaf canopy and then maintaining that canopy through to harvest. Protein levels of maize can be improved with the correct balance of nutrition, particularly nitrogen, phosphorus, sulphur and zinc which will improve grain protein content and quality.