How to Increase Oat Yield

High yields of oats come from the correct balance of grain numbers per ear and ears per unit area.

It is important to ensure that each grain reaches its optimum size and weight which will come from a disease and weed free crop. In short growing seasons the target population is about 500 plants /m2 compared to the normal season target generally being 250-350 plants/m2. 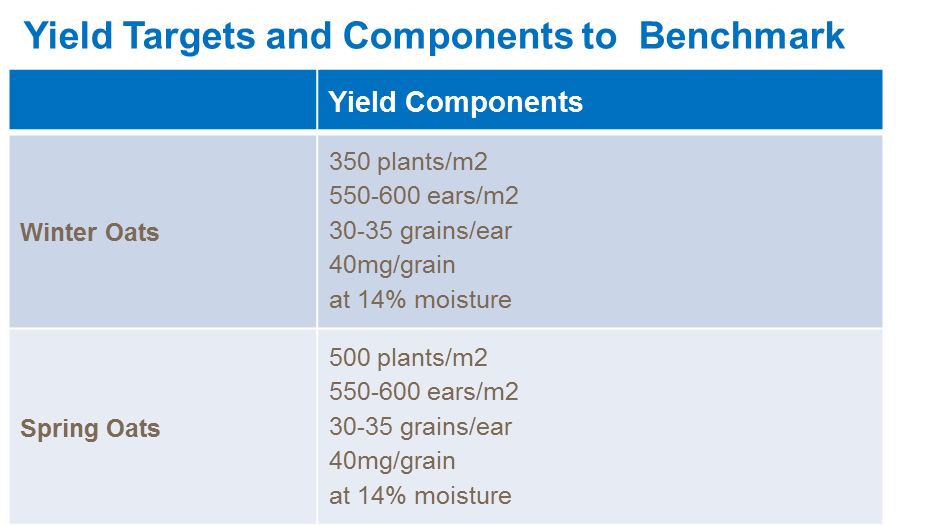 The shoot density will depend on the quantity of seeds sown, the depth of sowing, the tillering at the beginning of the growing season and the rate of tiller survival. The effect of the seeding depth on the density of shoots is that tillering is weaker if the seeds are too deep in the soil. The ear density at harvest depends on the number of shoots that produce fertile ears .

Oats are especially susceptible to grain abortion caused by drought which shows as empty white ears in the crop. Balanced crop nutrition of all major and micro nutrients is essential to help grow plants that can support this grain ensuring that it reaches its potential as well as meeting the market requirements.

Oats thrive in different soil types with mineral soils giving the highest quality and yield, with a thinner husk compared to those grown in organic soils. Nitrogen released from fertile, organic soils during the growing season can often cause lodging problems. The root system of oats is large and explores the soil well, giving a high soil nutrient use efficiency. Like other cereals, oats give the best yield in fertile and well-limed soils, however, where the pH is low they grow better than other cereals.

At the beginning of the growing season during the foundation (establishment) phase, key nutrients affect the speed of leaf development and the number of tillers that are initiated. As the crop moves into the construction phase with stem extension being the start of this, large quantities of nutrients will be taken up as dry matter production accelerates. Finally when the production phase begins with flowering, grain set and grain fill being the main features, good nutrient supply is critical. The plant must also get sufficient amounts of water to enable optimal growth and development.

In all three of these phases of growth both macro and micro nutrients need to be managed. The fertilizer program for oats should be designed on the basis of the fertility of the soil.

Of the macronutrients nitrogen and potassium are required in the highest quantity. Phosphate requirement is similar to sulphur. The greatest demand for all macronutrients occurs during rapid spring growth.

A balanced crop nutrition strategy is essential and should also include secondary and micronutrient which are essential elements in achieving high yields.

Read more about how to influence oat yield