On average, 70-85 % of all world sugar comes from sugarcane – most of the rest being derived from sugar beet. The biggest sugar consumers are India, the EU, China, Brazil and the USA with a combined use of around 70 million tonnes of sugar/annum – almost 50% of the world’s total consumption. Global per capita consumption now stands at around 24kg/person and continues to expand by 1.5-2% per person per year. Top exporters of raw sugar are Brazil, followed by Australia and Thailand. Russia, the EU and USA are the three main importing regions.

While most of the world’s sugarcane production is processed to produce refined sugar for a range of uses as a sweetener in food manufacturing, some regions produce juice from sugarcane.

Sugarcane juice is extracted from pressed sugarcane. Often pressed and sold by street vendors, sugarcane juice is sold in various forms and mixes such as with mint, ginger, lemon and ice. It is commonly consumed as a drink in Asia and Latin America.

Sugarcane is widely regarded as one of the most efficient sources of biomass for bio-fuel. Ethanol yields per unit area from sugarcane are at least double that produced from wheat or maize. 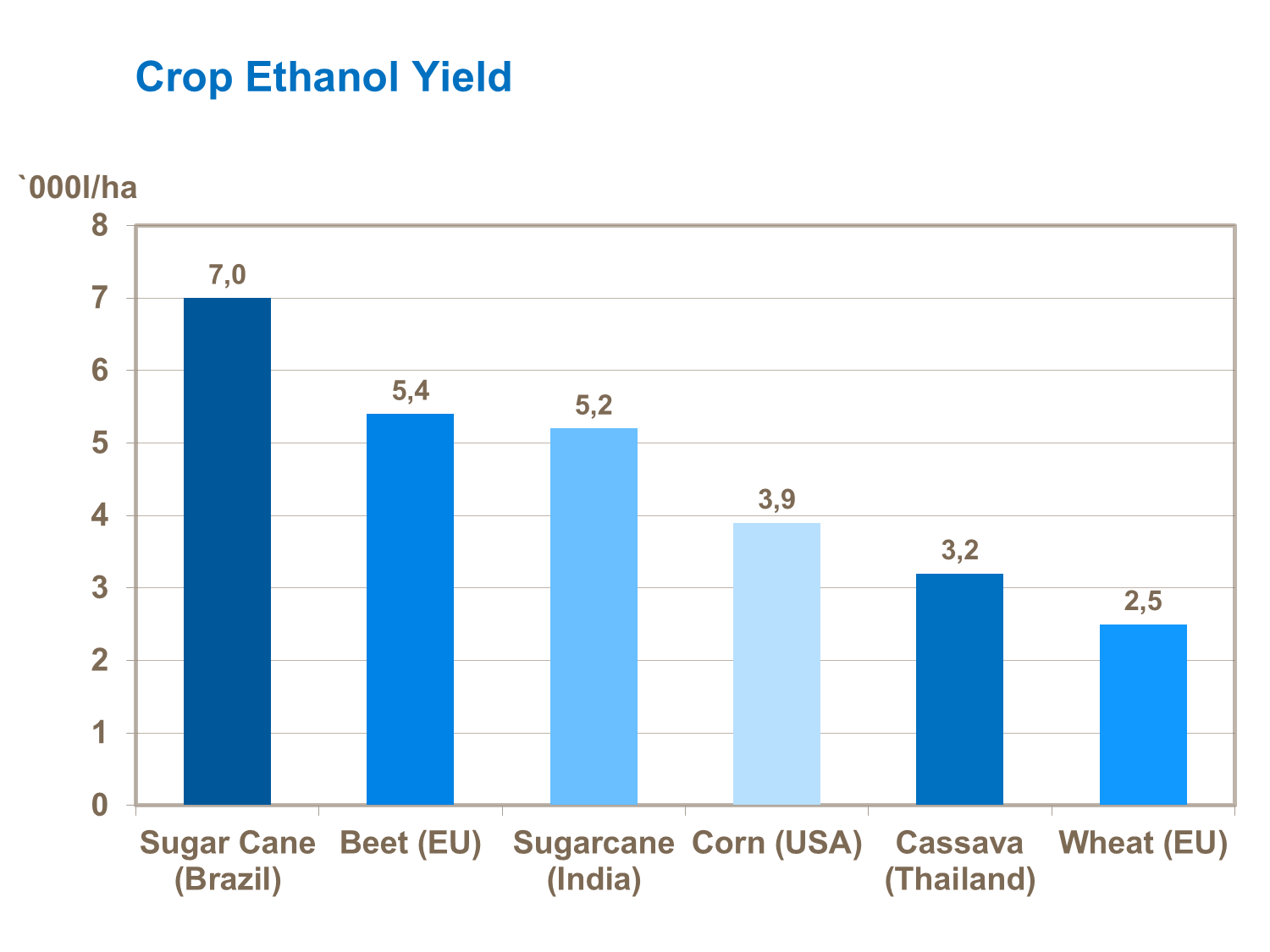 Brazil’s total ethanol production from sugarcane is over 31 billion liters/annum with 80% plus being used in the transport sector mainly for domestic consumption and sold as pure ethanol or blended with gasoline.

The USA is the only other significant producer of bioethanol, producing around 50 billion liters/year from maize. European bio-ethanol production stands at around 5 billion liters – China currently produces around 2.5 billion liters per year.

The use of sugarcane for ethanol does not result in a significant net emission of greenhouse gasses. This is because carbon dioxide released from the burning of ethanol balances that absorbed by photosynthesis during crop growth. 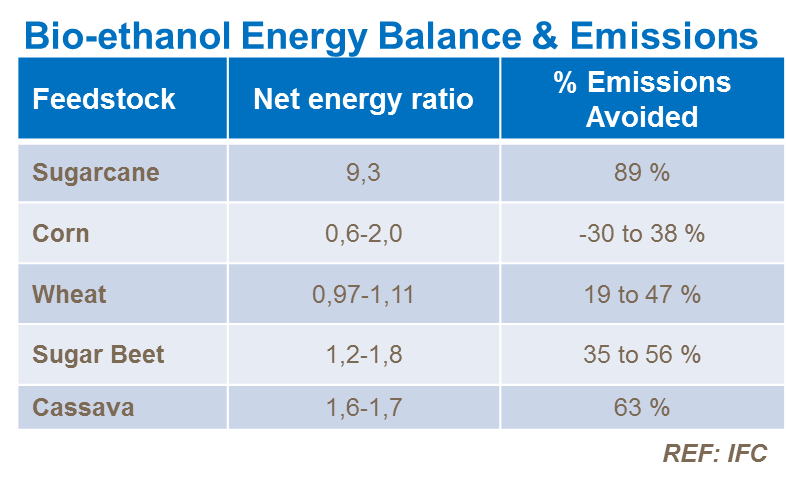 The direct consumption of fossil fuels within the ethanol production process is limited to transportation, harvesting and the use of agronomic inputs, including fertilizers. However, even taking this into account, the greenhouse gas emissions balance from sugarcane is very favorable compared to other crops.

In comparison to ethanol from maize, wheat, sugar beet or sorghum, sugarcane produced ethanol has a higher net energy ratio and a lower level of CO2 emissions.

Furthermore, burning bagasse (the fibrous residue left after crushing), to produce power, enables the production of ethanol from sugarcane without the need for any external source of energy.

Indeed, it is estimated that once bagasse is fully utilized across all of Brazil’s bioethanol plants, this could supply 13% of Brazil’s energy.

While it could be argued that fuel production reduces the amount of land available to produce food, current bio-ethanol production from crops worldwide is produced across 10 million ha – less than 1% of the world’s arable land.

Market requirements differ according to country and end-use. Most sugarcane is processed centrally by mills and production needs to meet the requirements of these processors. Sugarcane sent to the mill needs to:

The value of the crop across most producing regions is determined by yield of sugar. With sugar content of sugarcane ranging between 11% and 16%, growers need to optimize levels without compromising cane yield.

In countries such as India, payment systems are based on the average quality of the cane provided by the thousands of growers that grow the crop in any region. This gives little incentive to improve sucrose content of the cane. Increasingly though, payment is linked to cane quality of an individual producer and this is tested by the mill based on representative cane samples.

Tests include the assessment of the following characteristics:

Payment is commonly based on sugar recovery from the cane using a formula that takes into account those characteristics listed above. In Australia this is known as the Commercial Cane Sugar or CCS. CCS is based on simple assumptions that sugarcane predominantly contains pure sugar, impurities, water and fibre. Thus, the lower the level of impurities and fibre, the higher the CCS in the cane.

Often, in order to ensure continuity of cane supply, a relative CCS payment scheme is applied by the mill. Thus, the grower’s cane is assessed and compared with that of the average of all cane processed and the CCS payment is adjusted accordingly.

This encourages producers to supply cane early and late season in the harvest period, and during wet days when CCS is also lower, without penalty. With the harvesting operation often grouped regionally around the sugar mill, growers may only harvest their crop during 4 or 5 weeks of a 20-25 week cutting season.

This relative CCS payment scheme means they are not disadvantaged financially. The biggest influence on CCS is growing season. Wet years correspond to lower CCS as a result of reduced sucrose concentration. Sucrose contents are generally lower in high rainfall, non-irrigated regions.